Obstructive sleep apnea is a condition in which the flow of air pauses or decreases during breathing while you are asleep because the airway has become narrowed, blocked, or floppy. 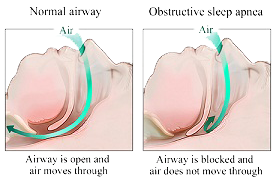 All of the muscles in your body become more relaxed during sleep. This includes the muscles that help keep the airway open and allow air to flow into the lungs.

Normally, the upper throat still remains open enough during sleep to let air pass by. However, some people have a narrower throat area. When the muscles in their upper throat relax during sleep, their breathing can stop for a period of time (often more than 10 seconds). This is called apnea.

The snoring in people with obstructive sleep apnea is caused by the air trying to squeeze through the narrowed or blocked airway. However, everyone who snores does not have sleep apnea. Other factors may also increase your risk:

The goal is to keep the airway open so that breathing does not stop during sleep.

The following lifestyle changes may relieve symptoms of sleep apnea in some people:

Continuous positive airway pressure (CPAP) is now the first treatment for obstructive sleep apnea in most people. CPAP is delivered by a machine with a tight-fitting face mask.

Many patients have a hard time sleeping with CPAP therapy. Good follow-up and support from a sleep center can often help overcome any problems in using CPAP.